Happy St. Joseph’s Day!  In honor of St. Joseph, we will be having a St. Joseph’s Table after both Masses on Sunday, March 20.  Please stop by the parish center!  Donations of meatless dishes and sweets will be gratefully accepted and can be dropped off before or after Mass.

Origins of the Tradition

Legends from the Middle Ages attributed the end of a devastating drought to a prayer-devotion that the Sicilian people made to St. Joseph.

During a time of drought and famine, no rain fell on Medieval Sicily. Food crops for both people and livestock withered and died. The people prayed to St. Joseph for help.

When the clouds opened, the desperately needed rain poured down, and there was much rejoicing! After the harvest, to show their gratitude, they prepared a table with special foods to honor St. Joseph and to share with the poor. After thanking and honoring the saint, they distributed the food to the less fortunate.

This celebration became an annual tradition. Each year, wealthy families prepared huge buffets. The less fortunate people of the community, especially the homeless and sick, were invited, and all the remaining food and proceeds were given to the poor.

Through the years, the tradition has remained throughout Italy, and is also prevalent in Poland, Malta, Spain, the Philipines, and, with the influx of Sicilian immigrants to the US, here in our own country.

From Year of St. Joseph

Come see our faith formation students perform in the SKT-LMC Christmas pageant this Friday, Dec. 10 at 6:30 PM in the Christ the King gym.  All are welcome.  Pizza and dessert to follow. Enter through the gym doors in the back of the school.

Due to the very rainy forecast, the Knights of Columbus Easter Egg Hunt has been rescheduled to next Saturday, April 27, at 10 a.m., weather permitting. 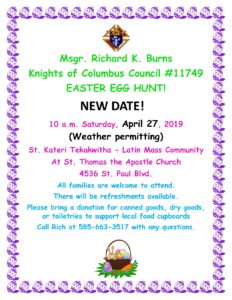 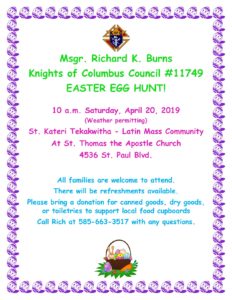 Please join your fellow parishioners for BEST LENT EVER, a free email program from Dynamic Catholic.

Lent comes every year. It’s meant to be a time when we invite God to help us become the-best-version-of-ourselves. But for many of us, Lent isn’t a transformative experience. It’s just a time when we give up chocolate or something else we enjoy, then go back to it at Easter.

This year, you can change that with BEST LENT EVER. Each day of Lent, you’ll receive a short inspirational video that will help you find areas for growth, build better habits, and spark lasting change in your life. All you have to do is sign up at http://www.BestLentEver.com.

Please join us in the Parish Center after both Masses on Sunday, March 18, as we celebrate St. Joseph’s Day. In a spirit of sharing, we will have St. Joseph’s bread and oranges.  Donations of a meatless dish are gratefully accepted, but not required! 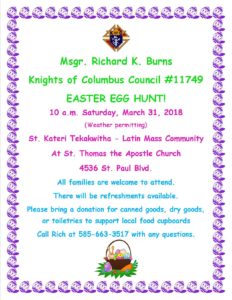 Just a reminder, SKT-LMC will have two Masses on Thanksgiving:

There will be games for kids, a bounce house, and a dunk booth.  Anyone wishing to be a dunkee should bring a change of clothes.  There will also be a sweet surprise!

The picnic will be catered by Sticky Lips BBQ.  If you are able, please bring a dish to pass.  Soda will be provided and there will be a cash bar.  Free will offerings are gratefully accepted.

If you haven’t RSVPed, don’t worry.  There will be plenty of food.

For those who are not familiar with the Exempts, it is just 1.3 miles from St. Thomas the Apostle: